This time we worked with the superposition of sin and cos waves.
Check it out HERE. Starting to work on a game for children… a simple tamagochi where the character (a dog) on-screen asks to be petted… a real stuffed animal with switches will then know if the child has petted the right place.
Click HERE to see the first version to test the code and switch… press any key on the keyboar to make it bark and move its mouth 🙂
Now I have to add switches to the rest of the stuffed animal and create a more interesting (and pretty for that matter) dog on screen which will to be petted and point to where it wants to be petted. 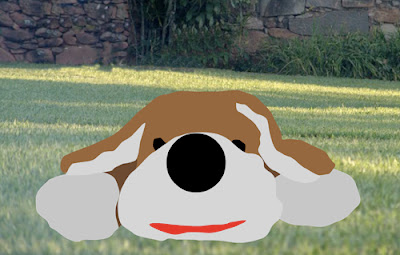 And here we go! New version of the Inclusive Pong Flash Game!

Went to see a great documentary yesterday called “Helvetica” – yes – the FONT!!
It looks at the ubiquity of this font in today’s world – or at least the Western world – why some designers love it, some are “over” it, but mostly how it came about (Linotype, Switzerland – 1950’s – most readable font) and how the advent of computers made it even more widespread (it is the default font for computers).
There were many amazingly beautiful still shots all through the movie illustrating Helvetica around the world.
Worth checking out not only from a design point of view but also in terms of niche markets, trends, changes in society, and even cognitive psychology – why the hell does the eye like Helvetica more than other fonts?
And by the way – this is not Helvetica 🙂

This time the homework introduced some more trigonometry and vectors…
Here it is 🙂
Played a bit with one of them:

For Computers for the Rest of You we had to read “Happiness In Everyday Life: The Uses of Experience Sampling” by Mihaly Csikszentmihalyi and Jeremy Hunter.

For me the most interesting aspect of this paper is to show how smart nature is. Basically our bodies trigger happiness in us when we are socializing and doing activities that are not stressful but require us to think and use our abilities – from that we see that nature is basically tricking us into finding a partner and evolving into something better by giving us a “cookie” when we are doing such activities. Another interesting finding of the study was that those who actually spent time studying or reading, which bring on lower levels of happiness, report a higher than average level of happiness when doing sports or socializing proving the concept that you cannot know true happiness if you’ve never experienced true sadness.
The second part of our homework was to think of the logging project we want to work on. I am thinking of the following:

So the new Pong is almost ready – have to figure out some mouseButton bugs… right now you can only adjust the settings of the game OR play it…
To see the adjust settings game click HERE.
To play the game without adjustments, click HERE.
Will post the final version soon.
As per the documentation I included, here are some features I still need to include:

The amazing power of water… and firemen for that matter:
http://www.chilloutzone.de/files/07091101.html

After thinking I would have to go to an Apple store and invent some story that “a friend” messed up with my iPhone and it does not work any – I want a new one – I was able to unlock the iPhone for any carrier!
It is a “painful” process but with the help of some sites and UNIX knowledge it is done.

That did it for me… put in my Brazilian SIM card from TIM and there I was roaming on T-Mobile’s network… Made a call and it worked. My AT&T card is also working – tested a call, SMS and the EDGE network.
Ufff!!
More information about this entire process with more detailed instructions and things to do if something goes wrong: http://iphone.unlock.no/
Also – this seems to be the wiki with the most up to date information – http://iphone.fiveforty.net/wiki/index.php/Latest_Progress_Report – there is a GUI app called anySIM that they released but it did not work on my phone – had to go the manual way described above.