Last week I went to San Francisco to attend Apple’s World Wide Developer’s Conference – mainly to find out more about the iPhone and get some answers to some questions I had about the programming on it.

Amazing conference – over 5000 people and 1000 Apple Engineers to actually look at your code and help you out! Unique opportunity.
I’m not even going to post an update on the novelties about the new 3G iPhone simply because there are thousands of news articles about it already. In any case here’s a short list of what I thought was most relevant to me:
– 3G meaning faster internet connection on the cellular networks
– GPS for more accurate geo-coding
– Application notifications – the ability to push notifications to your application on the iPhone even if it is not running.
On Thursday Moran and I took a break from the conference and went to see the Golden Gate. Here are some photos:

Last night my bike was stolen!

As you can see from my previous post – it was happily tied up to a street sign for the past year and a half or so with no problems. Many people leave their bikes on the streets like I did, and I never noticed one of them missing.
This bike was special.
It was a classic – a 1980’s Peugeot mountain bike – back when the geometry of mountain bikes were more like road/racing bikes – no suspensions – thumb shifters – Shimano Deore XT – only the rear gears were indexed – heavy as hell but a tank!
My father got it back in the days but I quickly adopted it as my own whizzing around the streets of São Paulo. I went everywhere with that bike.
I brought it to New York back in 1997 when I was living here last. It was my second bike – or the bike people used when they came to visit me.
When I left New York, I left the bike behind and my friend Phillip decided to keep it in his house in Washington.
9 years later I go move back to New York and go “rescue” her from Phillip’s garage. It was intact – the gears were still well adjusted, the breaks worked fine – apart from no air in the tires, it was ready to be ridden again.
Last summer I took a trip around the world and took it with me!
So if someone sees it, please let me know!! 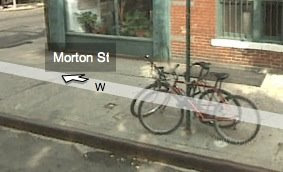