As some of you may know I’ve been setting up a small school / gallery space here in São Paulo in a space owned by my father… well it’s literally under his house – a sphere.
The school is called Institudo de Artes Interativas or Interactive Arts Institute.
iAi (eeh-ah-eeh) in Portuguese means “so?” in the sense of “what’s going on?”
Our slogan is a question.
iAi? Como funciona?
So? How does it work?
In any case, I met with Liana Brazi, Russ Rive and Marcelo Pontes fom SuperUber some months ago and we realized that their work and what I want to teach here at the school are completely in line.
They were looking for a space for their first self-signed exhibit.
I was trying to explain what I wanted to teach here at iAi.
I immediately offered the space. It was a perfect match!
Pixel Park starts next week – Aug 11 to 23!!
The setup is looking great!Veja também os videos das obras do SuperUber!

So I was showing off the iPhone… 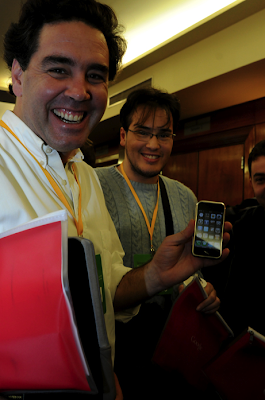 Take a look at the rest of the pictures.

Another item about my school (www.iaibrasil.com.br) published, at my request 🙂

Mac Magazine thanks to Rafael Fischmann!

Uff!!
Finally I put all the information in the right places and my school’s website is up!!
Will be translating it into English and Spanish shortly… for now here it is in Portuguese:
www.iaibrasil.com.br

Sagatiba – a Brazilian premium cachaca – a distilled drink from sugar cane – hired me some months ago to do their iPhone application.
It got approved by Apple to be placed on the App Store this weekend – for free.
Check out Sagatiba’s web site.

Link to the App Store:
Also – got a review from a Brazilian blog – iPhone Blog.