Motorcycle “problem” day – nothing serious.
First incident was a total lack of attention on my part – last night I topped off my oil and didn’t screw the top back on tight enough, obviously… oil was flying off onto my leg and my side bag… we stopped at a gas station, bought some more oil, cleaned the bike up a bit and went on. Definitely needed to clean up a bit 🙂 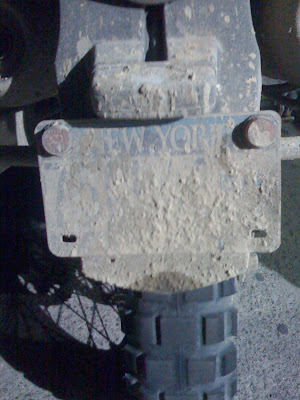 The ride to Guatemala City was uneventful.
We then went on the BMW and KTM dealers. Marc also needed some oil and I just wanted to check a little rattling noise I get when I’m off road.
We got a very cold reception at the BMW dealer so we went to the KTM where things were completely different. The mechanic came out and checked my oil, my chain and even gave us some great tips as how to get to El Salvador.
We then went to a hardware store to buy some oil for Marc’s bike and an 12V air compressor for our tires in case of a flat in the middle of the road. It’s interesting that it was one thing that no one, including ourselves, thought of including in our packing list.
I also went ahead bought some more industrial strength velcro to attach the camera on new places on the bike… by the way… no one commented on the new angles 🙁
On the way back to the hotel we found another BMW dealer. We stopped to check it out. The reception here was a lot better. Marc got a new visor for his helmet which was all scratched up and some pieces the had fallen off his bike. We also went ahead and filled up his bike with
some more oil… but we put in too much oil… not good at all for the engine. One of the guys at the dealer told us not to worry since when we turned the engine on, no white smoke was coming out.
While all this was happening I checked the bolts on my KTM – all good.
I also checked the front wheel to see if any of the pot holes I hit caused any damaged… nothing perceptible… just normal little skews.
I then checked Marc’s front tire and found a bulge on the side wall of his tire and an indent on the rim. We got really worried about that but there was not much we could do at that point – we were tired and the dealer was closing shop. 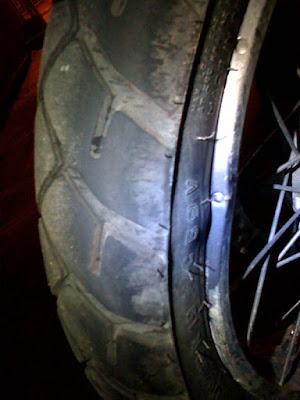 When we got to the hotel Marc called his trusted mechanic – Eric. He told us that over filling the oil is a real problem.
We should lean the bike “20 degrees” to the right and see if we can see air on the window the BMW conveniently has under the left cylinder.
He also said that there is not much to do about the rim or the tire other than replacing them, but if the bulge does not grow, tire pressure does not go down, spokes are not broken, and the wheel is not out of true it will be fine.
We went to the bike to check all of this… but how would we know what 20 degrees was? Eric said that it was about the angle the bike sits on the kick stand… still hard to figure it out on the opposite direction.
As good geeks that we are, we went to the iPhone’s App Store and downloaded a Level application 🙂
On the kick stand the bike sits at 12 degrees.
And to our satisfaction we saw air on the indicator window when the bike was leaned over by 16 degrees… 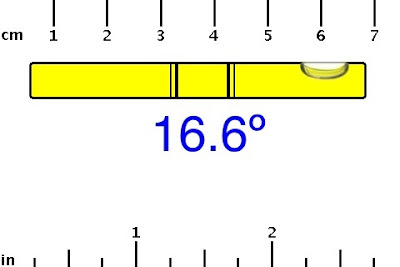 Spared us a good amount of work in draining the oil… it’s not hard but just time consuming since you have to remove the crash bars and the skid plate to then get to the plug. Then you have to collect and dispose of all that oil and fill it up again. Probably would’ve taken us a good 2 or 3 hours.
Tonight we’re going out for dinner with a friend of mine from college who I’ve haven’t seen in 10 years or so – Enrique Arguello – should be fun!